Whether installed on the roof of a home or used as an alternative power source for a pocket calculator, the fact of the matter
is that the solar panels have become an increasingly important part of our daily lives. Still, very few are aware how these clever devices function and the pronounced benefits that they can provide. Let us take a look at the science behind a solar cell and why this technology is predicted to enjoy a « bright » future.

The Principle Behind a Solar Cell

Solar panels (such as those offered by Alma Solar ) are comprised of tiny individual components known as photovoltaic cells. The term « photovoltaic » essentially signifies that light waves (known as photons) are transformed into electrical energy. These cells are comprised of the element silicon as well as other substances. Without becoming too technical, the main intention of these cells is to separate the electrons off of atoms using the power of the photon. Electrons are tiny « packets » of energy and if these are properly collected, a substantial source of electricity will be generated.

The Power of Numbers

Of course, the actual amount of electricity produced by a single solar cell is negligible. This is where the true « power » of the panel comes into play. Simply stated, a solar panel consists of a large number of solar cells which are linked together by electrical connections. It therefore stands to reason that larger panels are able to generate greater amounts of power within a given period of time.

Supplying Power to the Home or the Business

Initially, the solar cells will convert sunlight into DC (direct current) electricity. However, this needs to be modified to power items such as lights, appliances and boilers. A typical solar array will therefore use a device known as an inverter. As the name suggests, the purpose of this unit is to convert DC electricity into AC (alternating current) electricity. It can then be fed throughout a home or business; offering a completely clean and renewable source of energy. In the event that the property owner does not use all of the power, it will often be fed directly back into the electrical grid. Not only can this save money, but there are many programmes throughout the Unite Kingdom which offer « green » incentives. Cash-back offers and rebates are some of the potential benefits to be enjoyed. 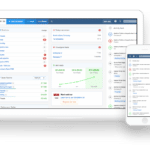